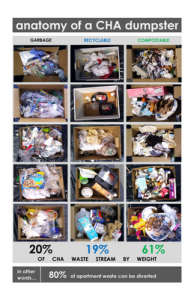 Over the past few weeks, the sustainability staff has carried out a waste audit to determine how much of the waste from campus apartments could in the future be diverted away from landfills. While rifling through garbage wasn’t exactly pleasant, the results found were pretty staggering: over the course of the audit, a full 80% of waste from campus apartments was material that could either be recycled or composted. That means only 20% of the garbage was actually waste!

Besides the percentages, there were two interesting themes found throughout the audit. One was the presence of plastic. Plastic was by far the most common form of waste. Wrappers, packaging, toys – you name it, it was made from plastic. Plastic poses a threat to the environment because it is being used more and more and often for single-use purposes. Since plastics are not biodegradeable, they stick around in the environment for a really long time, and tend to end up where they are not wanted (see a previous post about plastic in the oceans).

The other recurring item found during the waste audit was food. The waste audit found a large amount of uneaten food items that had been tossed out. The Environmental Protection Agency notes that the United States spends 1 billion dollars a year just to dispose of food waste, and that food waste makes up the largest component of our waste stream by weight. What was interesting about the food waste found during the waste audit was that oftentimes it was not food scraps but rather uneaten or unused food items that had gone bad or were no longer wanted.

The waste audit revealed many ways we can be better stewards in managing our waste, both from a policy perspective and on an individual basis. Instituting composting programs will help reduce waste expenditure and divert material for better use. Individual practices like cutting down on the use of plastics and sharing and conserving food instead of throwing it out can also have a huge impact. Together we can take a big step towards living more sustainably.