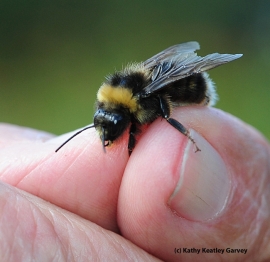 The Western Bumblebee has been declining in population since 1998, and hasn’t been seen in Washington state for over a decade. Until recently, that is, when the bee was seen by one Megan O’Donald, as reported by The Seattle Times, in a park northeast of Seattle. Though the cause of the bumblebee’s long absence is unknown, it seems to be connected to the development of commercial bumblebee-breeding programs, these bees being the only native pollinators for tomato plants.

Bee enthusiasts are now hoping that whether or not these bumblebees are for some reason resistant to whatever wiped them out of the state initially, the small amount remaining can grow through conservation efforts, like the planting of more flowers and the growing of more native plants, which give bees critical nutrients (the SPU campus could be said to be very bee-friendly with its vast array of flowers and foliage).

For whatever reason, bumblebees seem blind the to the color red, so if you’re looking to buzz up your garden, don’t include many roses. Instead plant purple, blue, or yellow flowers, apparently the preferred colors in bee culture. Plant diversity is also helpful to bees, with different types of pollen protein found across species. The presence of bumblebees is important, since they act as pollinators for plants even when the weather cools down and honeybees fall out of action. In this lens, the new sightings of the western bumblebee are encouraging not only for bee lovers, but for everyone who enjoys living amongst the amount of greenery we are lucky enough to be surrounded by here in Seattle.