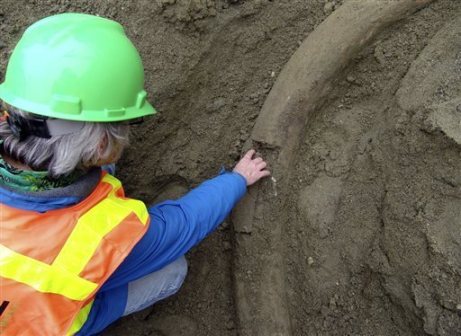 It’s always interesting when the urban present that we’ve grown accustomed to collides with a piece of the natural past. Such an event has recently occurred in South Lake Union, when builders unearthed a mammoth tusk that has been under the land for an estimated 16-22 thousand years. Finds like these are reminders that our concrete world was once made up of grassland, and animals such as mammoths roamed through what we now call streets. Before and during the ice ages in which the mammoth lived, Elliot Bay and the Puget Sound didn’t exist. There was just wide open plain, all the way to the ocean. It’s a rather spectacular image, to picture a mammoth strolling down the sidewalks of Seattle. And it’s fun to think that it was actually happening one day, just with less Starbucks’ around.

The Burke Museum is currently trying to get permission from the company building on the site to dig up the remains of the mammoth fossil and put it on public display. This would be very appropriate, as the Columbian Mammoth happens to be Washington’s state fossil. Such discoveries have happened before, but not very often; the last mammoth-related find in Seattle can be traced all the way back to 1963. Here’s to hoping that Burke gets permission to preserve this awesome artifact for all to see.