While researching the Burke Gilman Trail (BGT) and its Missing Link, I found the origins of the (t)rail particularly intriguing. Rather than loading readers down with a ton of historical data in the original BGT post, I dedicated a separate post to the history of the multi-use trail.

The origins of the Burke Gilman go all the way back to 1885, six years before SPU’s inaugural year. The Seattle Lake Shore and Eastern (SLS&E) Railroad founders: Judge Thomas Burke, Daniel Gilman and ten investors, spearheaded an effort to get Seattle on the map as a major center for transportation and trade. They hoped to transport various raw materials including coal from Issaquah, gypsum, iron, and precious metals in Snoqualmie Pass, hops from Snoqualmie Valley, and timber, grazing, and wheat from eastern Washington (Historical and Cultural Resources Inventory, King County p. 6). 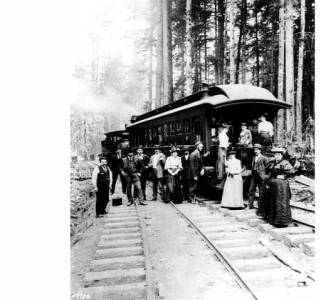 The line ran from old downtown all the way up to Canada and east to Spokane and Walla Walla. As a critical transporter of the area’s coal and logging industries, the railway was used heavily from its inception, through its acquisition by the Northern Pacific in 1913, and on until 1963. In 1970 a merger between the Great Northern, Northern Pacific, and Burlington railways led to the creation of the Burlington Northern Railroad, however, the part that later became the Burke Gilman went out of service in 1971.

Soon after it went out of operation, citizens launched a campaign to convert the railroad to a public cycling, running, skating, and walking trail. After overcoming nearby residents’ objections, the City of Seattle, University of Washington, and King County worked to develop the BGT route. In 1968, the city was granted the right-of-way and on August 19, 1978, the Burke Gilman Trail opened, linking 12.1 miles between Fremont’s Gas Works Park and Kenmore’s Tracy Owen Station.

In 2006 the trail was expanded from Fremont to Golden Gardens, connecting major parks, neighborhoods, and recreational activities for thousands of trail users. On March 9th of this year, a trail completion plan for the Missing Link was approved after years of debate. Check out the new route and press release here. More to come on how the construction and completion of the BGT will impact SPU cyclists and trail-users.

“[The Burke Gilman Trail] demonstrates that when the proper facilities are provided many people will chose healthy, pollution-free, non-motorized modes of travel.” (Seattle Burke Gilman History).

Over the years, SPU students, faculty, and staff have greatly enjoyed the benefits of having this trail nearby, especially for cyclists looking to get exercise, avoid rush hour traffic, and tread more lightly on the earth. As the University continues to grow in size, low-carbon emitting modes of transport will become even more important in offsetting our greenhouse gas emissions, and we look forward to supporting increased cycling in the future.

With Lent drawing to a close — as evidenced by the advent of Spring quarter, new blooms, and the return of the sun — be sure to take some time on the BGT to care for yourself and enjoy the newness of the season.

Interested in more grassroots efforts to convert former railroads into multiple-use trails? Check out Rails-to-Trails, a NGO based out of Washington, D.C.