This summer I’ve enjoyed running on the Burke Gilman Trail (BGT). Some evenings I’ll use the trail to connect my route from SPU to Gasworks Park; other times I’ll run from yoga in Ballard towards Fremont to get back home. Rain or shine, thousands of cyclists and pedestrians frequent the 19.8-mile trail every day. Extending from Bothell to Ballard, the multi-use trail runs alongside various bodies of water including Lake Washington, Lake Union, the Fremont Cut, Salmon Bay, and Shilshole Bay. 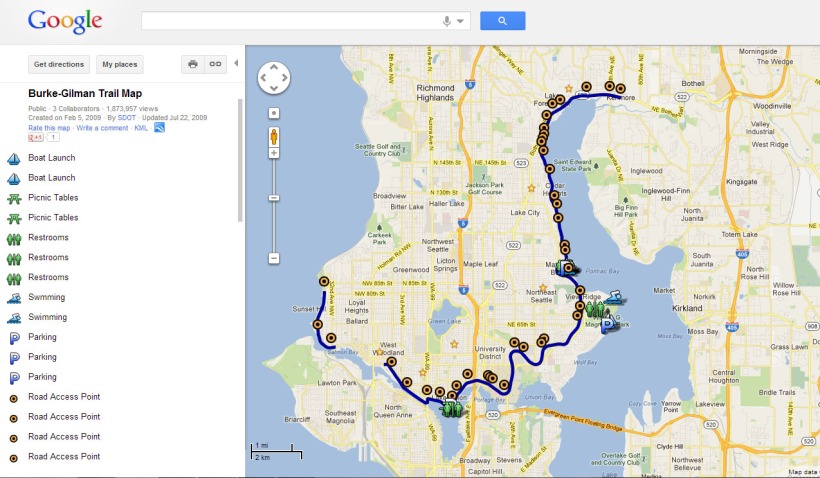 The Burke Gilman trail with various road access and recreational points along the way.

The BGT has been one of the best surprises and most accessible places for me to exercise, although I’ve always felt leery (Leary) about running through the Missing Link. Following those feelings, I decided to do some research on the mile-and-a-half portion and how its completion may affect trail-users at SPU.

History of the Missing Link

The Burke Gilman Trail has been in operation for over forty years and originally spanned from Kenmore to Lake Union. For twenty of those years, conversation in the community has revolved around extending the trail to Golden Gardens, as well as connecting the Missing Link portion that remains unfinished. This segment winds through Ballard’s industrial area along Salmon Bay (see map above), over railroad tracks, and between warehouses and other businesses. Unfortunately, this arrangement has proven dangerous for both trail users and commerce in the area. According to the Seattle Bike Blog, an estimated 293 people have gone to the hospital since the city first voted to finish the trail in 2003. 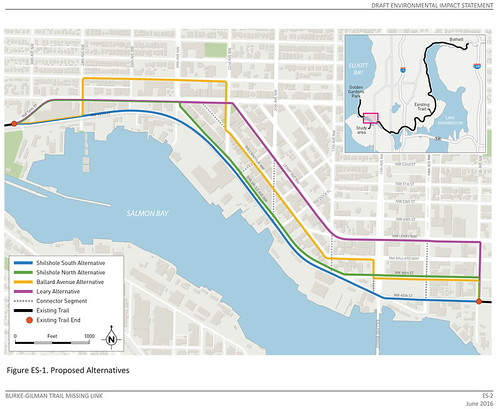 The amount of environmental impact reports, approvals for construction, appeals by Ballard businesses, and money spent studying the Missing Link over the last two decades is exhausting: 2,677 pages (online at least) have been created investigating the completion of this part of the trail.

This summer, a draft environmental impact analysis was released along with four alternatives proposed by the city (one along Leary Way, one along Ballard Avenue, and two on Shilshole Avenue). Thousands of citizens were able to weigh in on these potential routes and the decision is expected to be made with construction scheduled to start early next year.

Here’s Friends of The Burke-Gilman Trail’s take on each option. Also, check out Cascade Bicycle Club’s detailed timeline made in 2015 if you want to study up on the Missing Link yourself. 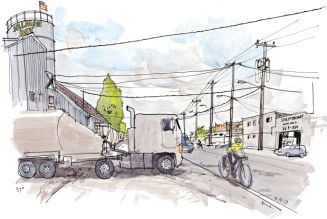 Why so much discussion and so little construction? It comes down to the concerns of trail users and businesses. Trail users care most about safety and ease of use. For industrial businesses, trail construction and users may impede business and freight operations in the area closest to Shilshole Avenue and Salmon Bay. For Ballard Avenue businesses as well as Sunday Farmers Market vendors and customers, concerns hinge on traffic flow through the area, parking availability, and the market’s operation if the Ballard Avenue option is chosen.

After completion, the BGT would most likely be closed on Sundays if the Ballard Avenue option was chosen, although auto parking capacity may decrease. Yet, if another route were chosen, the trail’s completion could positively increase access for trail-users and thus boost business. Finally, according to the most recent study (p. 7-29), the Shilshole South option may actually improve freight traffic for industrial businesses, and significant impacts to business are not expected.

As for SPU, the trail runs on the other side of the canal through Fremont, making it easy to get to Ballard, the University of Washington, and beyond. Based on our recent commuter survey, almost 9,000 one-way trips to and from SPU are made per month by student commuters on bike or on foot. Construction on the BGT may impact SPU commuters and recreational trail-users alike due to its proximity to campus and recreational areas. Stay tuned to see what collaboration will result from stakeholders’ mixed concerns as well as what detours may impact your use of the BGT. 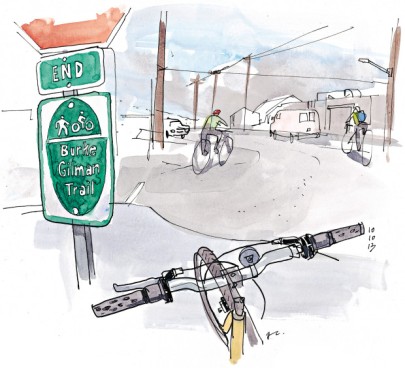 Still curious about the Missing Link? Check these sites out for further reading: